Kashy Keegan opens up about his post-HKTV music career and tackles our Hong Kong Citizenship Quiz
Home Entertainment 6 questions with Grant Almirall, and a game of Singin’ in the Rain-themed Would You Rather 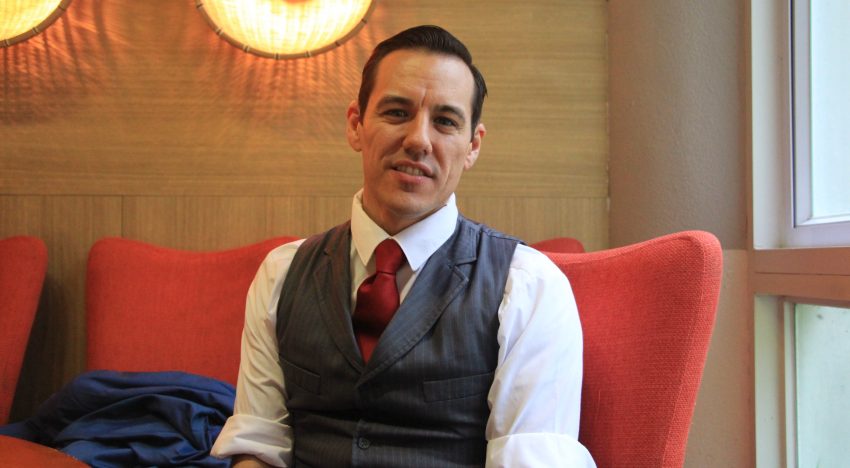 The skies decided that we would chat to Grant Almirall, and the rest of the cast of Singin’ in the Rain in the midst of the eerie darkness that shrouded Hong Kong, and the downpour that defined the year’s first Black Rainstorm Signal.

Set to open on September 25th at the Lyric Theatre, Hong Kong Academy for Performing Arts, Singin’ in the Rain follows Hollywood A-lister Don Lockwood’s transition from a silent film to a “talkie” star in the late 1920s, while juggling a budding romance with aspiring actress Kathy Selden. Based on the classic 1952 film of the same name starring Gene Kelly and Debbie Reynolds, the musical comedy is ranked 5th on the American Film Institute’s list of 100 greatest American motion pictures of all time. Having been in Cats, Rent, Chicago, Jesus Christ Superstar, Evita and pretty much any other hit musical you could think of, it was only a matter of time before Grant landed the role of Don Lockwood in yet, another theatre and cinematic classic, Singin’ in the Rain.

Rather cozily sat in the safe haven of the park cafe we were in, Grant Almirall talked about preparing for his role as Don, while flashing that million watt smile of his in spite of the dreary weather.

1. Don Lockwood claims that his motto is “Dignity. Always dignity.” Can you tell us a bit about that? Is dignity important to you in determining the direction of your career?

I think so. In the show, it’s kind of a gag. In the movie, he’s talking about being dignified. Meanwhile, he wasn’t really dignified growing up… it just shows how much he’s faking it. He’s a movie star, but he wasn’t always a movie star. Even in the musical, a radio interviewer asks him if he has any words of advice, and his answer is “Dignity. Always dignity. I went to dance classes and my mom and dad sent me to the best dancing schools.” Meanwhile, he grew up on the streets, tap dancing in the streets. That’s where it comes from.

2. Do you ever feel like the 5 year old in you gets unleashed when you get to splash around in that iconic Singin’ in the Rain scene, with no one telling you off?

Yea! I think the most important thing I’m thinking at that moment though is, “Don’t fall over, please don’t fall over!” It’s quite a physical number. You’re exhausted. At that point, you’re just trying to get through the show ‘with dignity’, and try not to fall over. There is an element of fun though. It’s fun to see the audience. I don’t look at them and splash them. I’m in my own world. There’s a 4th wall, so while I’m doing the choreography, I happen to kick water out, and splash the front row. They’ll be like “AHH,” and they’ll start laughing and screaming, hiding under the little plastic ponchos that they get. It’s fun to hear that. It does break that wall and bring them into the joy of the piece…the first three rows anyway.

I like to stay at home, play some video games, read a book, watch a movie.

4. You last played Frankie Valli from Jersey Boys. Vocally, with the falsetto and all, that’s quite different from your role as Don Lockwood now. How did you prepare yourself, when you transitioned between these roles?

When we started rehearsals, I had to use a different skill, not necessarily technique, singing is singing, but it’s a different sound that you create. Franki Valli was a rock, more modern sound. I say modern, but it was the sixties and seventies, while as this was an earlier time. The sound is rounder. I wouldn’t say operatic, but it’s a warmer sound. So there is a mind shift you have to do in the way you sing. You can’t just sing it normally. In contemporary music today, we’re used to doing certain things, like scoping up notes, or bending notes, certain stylistic things. That time, everything was sung very pure and very straight. It’s trying to break the habits of the way I sing now, to try and sing and emulate that sound.

5. Do you and the cast have sort of a pre-show ritual?

Everyone kind of does their own thing. We all do a physical warm up together, and we all do a vocal warm up together. An hour and a half before the show, we’ll come in. Somebody takes warm up. Everyone then goes to their dressing rooms, does their make up. You do get into a routine. It’s like getting up in the morning and going to work…except we put on costumes and go on stage.

6. Can you, in 20 seconds, explain why Hong Kongers should go see the show?

Yes. IT’S AN ACTION PACKED… no hahah it’s not action packed. It’s an evening full of wonderful dancing, beautiful characters. It’s larger than life, a total spectacle. There’s singing in the rain, wonderful dance numbers. It’s a must see for the entire family. 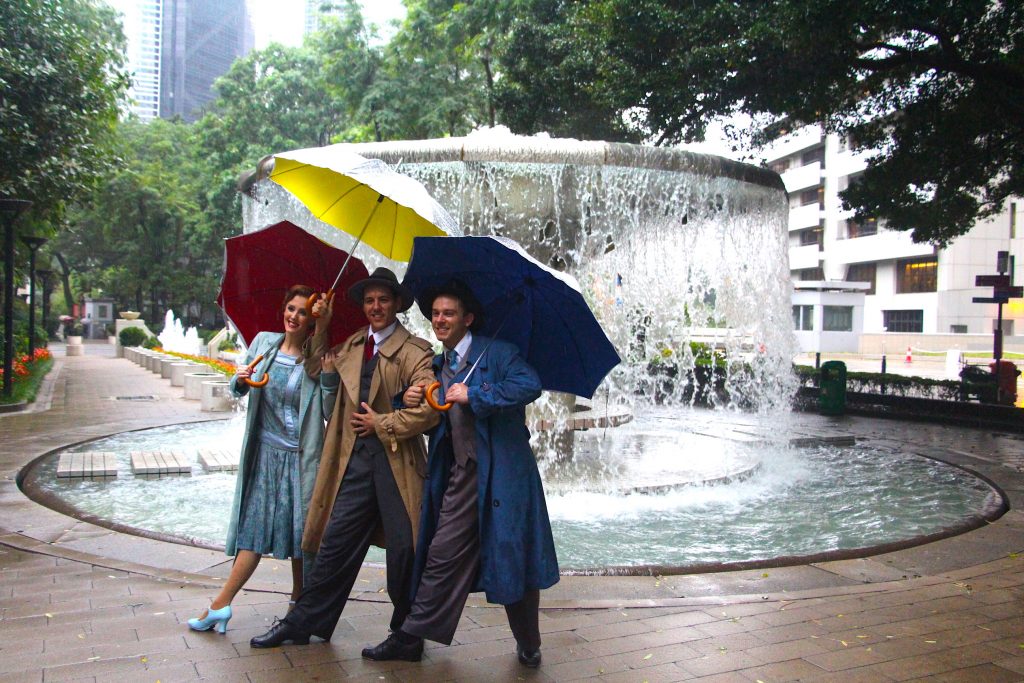 And then we challenged Grant to a game of Would You Rather, when it was really, just us trying to find an excuse to ask random questions without sounding totally bonkers.

A three piece suit. I’m normally t-shirt and jeans kind of guy, but suits are nicer sometimes. We do a lot of opening nights, functions and it’s always nice to wear a suit. You’re like, “Oh, I should wear this more often! It’s very dashing!”

Would you rather sing in the rain on a empty street, or sing in the shower at home, with all your friends and family outside?

Grant: Oh, definitely sing in the rain on an empty street.

MadbuzzHK: DO you sing in the shower?

Grant: I DO sing in the shower sometimes. I sing a lot of music theatre! Stuff from Aladdin, Disney.

Would you rather jump out of a cake, or have cake thrown at your face?

Probably jump out of a cake.

Would you rather have Brad Pitt randomly pop into your car while driving, or Robert Downey Jr.?

Just for laughs, we also asked Grant to do his best impression of Lina Lamont’s classic “I CAN’T STAND HIM” line, who is Don Lockwood’s clingy show-biz on screen love interest. You can find out how he did here. You can also check out the interview we did with Bethany Dickson who plays Kathy Selden, and Steven van Wyk, who plays Don’s best friend Cosmo Brown, here.