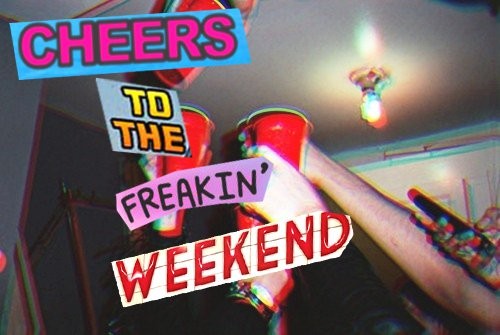 Tired of listening to the same tracks on iTunes? Spotify’s “Discover” just not working for you? We’ve compiled a list of new(ish) song releases you might have missed, as well as tunes from up and coming music acts we think you should know about. Whether you’re recovering from a hangover, out to seek adventure or stuck at home studying, we endeavour to soundtrack your weekend with this playlist of feel-good tracks.

Taken from the British indie rock band’s upcoming third studio album, Glitterbug, Greek Tragedy is the perfect song to wake up to on a tranquil Saturday morning and to kickstart your weekend (contrary to what the creepy music video may suggest). Bastille have also done their own remix of the song, giving it signature Bastille harmonies and a darker vibe. They claim it’s “meant to sound like a Batman film score or something”.

Winner of the BBC Sound of 2015, the BBC’s annual list of the most exciting new acts in music, Years & Years is an electronica / synthpop act bound to blow up this year. FYI, shorted-listed “BBC Sound of…” acts from previous years include Adele, Sam Smith and Ellie Goulding, so if we were you, we’d trust the guys from the BBC. Think Clean Bandit, combined with smooth Michael Jackson-esque vocals, and you’d get Years & Years.

If you were at Clockenflap 2014, you would have already had a preview of Handsome, when they played it to adoring Hong Kong fans last November. Highly reminiscent of the band’s earlier work in What Did You Expect From The Vaccines, Handsome is the type of song that could easily be played in the background of a GoPro commercial.

We reckon the 30 second intro to Wait For Life is what sunbathing on a beach in the Caribbean would sound like. Lana Del Rey’s distinct haunting vocals however, instantly transform the song into something much more than a holiday beach tune. Wait For Life is ambient, romantic, yet, melancholic. Granted, we’re not quite sure about the wailing at 3:26…but otherwise, absolute masterpiece.

With only a four-song EP under their belt, Great Good Fine OK is still rather new to the electronic / synthpop scene, but already demonstrating promise. Frontman John Sandler’s gentle falsetto is contrasted against a booming bass in By My Side, with a sprinkle of brass here and there that finish the song off with an air of grandeur.

Ready is taken from Irish rock band Kodaline’s sophomore album Coming Up For Air, set for a February 9, 2015 release. Often compared to Snow Patrol, Coldplay and Keane, the band could not be more “Keane” in this piano driven, live acoustic (ish) version of their latest single.

Just sit back with a cup of coffee, book in hand, and enjoy your Saturday afternoon with this laid-back tune from Norweigian singer-songwriter Erlend Øye. And if you like what you hear, Erlend will be heading to Hong Kong on March 17, set to play KITEC Music Zone. For more ticketing information, please visit Ticketflap.