Iain Cook is wearing a very retro and very cool Star Wars T-shirt as he greets us cheerily in a little tent on Clockenflap soil, just before CHVRCHES is set to perform. It’s no coincidence that we happened to have Star Wars trivia questions in hand. Iain’s Star Wars references on Twitter clued us in on his fondness for the films. We just couldn’t resist a little chuckle when we noticed how aptly dressed he was for our chat.

Scottish electronic / synthpop trio CHVRCHES have been riding on a wave of success in the past year, brought on by their critically acclaimed debut album, The Bones Of What You Believe. Having played Coachella, Glastonbury and sold-out shows worldwide, CHVRCHES is wrapping up the last leg of their tour as they perform alongside Travis, Tenacious D, The Vaccines, Rudimental and more at Clockenflap, Hong Kong’s own arts and music festival (Friday, 28 November 2014 – Sunday, 30 November 2014).

We talked to Iain about plans for a new CHVRCHES album, how Lorde reached out to them while curating the new Hunger Games soundtrack, his love of Star Wars, and (most importantly) where to hit for a night out in Hong Kong.

Madbuzz: It’s your first time in Hong Kong right? Have you had a chance to explore the city yet?

Madbuzz: What’s your favourite city to play when you’re in Asia?

Iain: I think the best crowd is kind of a toss up between Singapore and the Philippines. We played Manila a few nights ago and it was f**king insane! The fans were so loud, I had to turn my monitor up almost to deafening point because I couldn’t hear! Asia’s good for us! We had no idea, before we came here, what it would be like. It’s a great way to end our album campaign as well. This is our second-last show tonight, last show is in Korea. We’re off for 6 weeks after that, and then we’re going to write another album! (Madbuzz: Whoop!)

Madbuzz: You guys have been pretty busy lately! “Dead Air” has just been released as part of the Hunger Games: Mockingjay – Part 1 soundtrack, and you guys were also part of BBC Radio 1 DJ Zane Lowe’s project to rescore Drive, with “Get Away”. Can you tell us a bit about how you got involved in these two projects?

Iain: Yea! Zane just had the idea of picking a bunch of his favourite contemporary artists and asking them if they would contribute to it. He’s supported us for quite a while actually. We’ve been featured in a few of his Hottest Record(s) in the World, so we were really excited! And then we saw the lineup and we were like “Holy sh*t! There’s a lot of big names on this thing! We’ve got to bring our A-game!”. So that was just a couple of days in the studio that we had off between tours. For the Hunger Games one, Ella (aka Lorde, who personally curated the tracks for the new Hunger Games album) just approached us through email. We first met Ella and her band at Laneway Festival, at the start of this year. Ella told us what sort of thing she was after and again, we spent a couple of days in the studio for “Dead Air”, and she loved it!

Madbuzz: Do you find that it’s harder having to write songs with a pre-specified theme when you do soundtracks?

Iain: No, it’s actually a lot easier because you’re not starting with a blank page! Especially with the Drive one, we were writing to picture. I’ve got a background in writing for TV and films so it’s something I can understand. Drive has been out there for years so you can use the existing cuts and line them up to a tempo. You already have a tempo, you already have a rough form, and in a way it kind of frees you up to be creative within those parameters.

Madbuzz: If you, Lauren and Martin (the other 2 members of CHVRCHES) were to compete in the Hunger Games, who would win?

Iain: That’s a really good question. If it’s anything like the way that we play online video games, I think Lauren would probably win? She would kind of play the tactical game you know, observe. And she’d use her brain instead of use her reactions and instincts so, I think she would turn out victorious.

Madbuzz: Do you plan to go out tonight after the show?

And then we challenged Iain to a Star Wars trivia quiz to find out just how big of a Star Wars buff he is. (Questions taken from Shortlist.)

B. A piece of film editor’s jargon meaning Reel 2, Dialogue 2

Iain: I’m going to go with B. Is that right?

Madbuzz: Yes! Wouldn’t it have been awesome if it was the judo one though?

2. What is Han Solo’s call sign when he is patrolling Hoth on his Tauntaun?

3. How many languages is C-3PO fluent in?

This proved to be too easy for Iain, who said “6 million” nonchalantly without us even having to give him the choices.

4. The Millenium Falcon’s shape was inspired by:

A. A hamburger with an olive on the side

Iain: Lucas is from California so it’s not D. I am going to go with the hamburger. WAIT… NOO the pentagon?!?

Madbuzz: It’s the burger one

5. Which famous scientist’s eyes were Yoda’s based on?

Iain: It was definitely Einstein.

Madbuzz: It was Einstein indeed.

Iain: It’s not a clean sweep though! I’m disappointed. I’m gonna check some of those facts actually, particularly the burger one!

Madbuzz: Which is your favourite Star Wars movie?

Iain: Well that has to be Empire (Star Wars Episode 5: The Empire Strikes Back). Definitely, hands down!

Madbuzz: Did you hear about the teaser trailer coming out for the new one (Star Wars: The Force Awakens)?

To wrap things up, we tried to teach Iain how to say louder (DAH SANG DEE) and we love you (O DEI OI NEI) in Cantonese. He was phenomenally good at it…for about 30 seconds, before short-term memory failed him. Then again, we would expect nothing more from an 1 minute lesson, on the ridiculously complex language that is Cantonese. 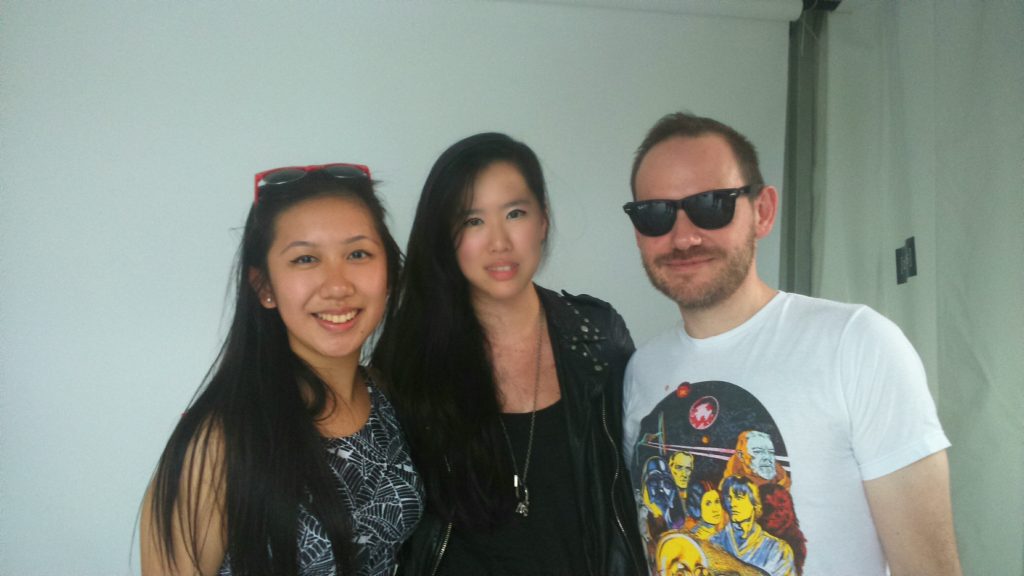