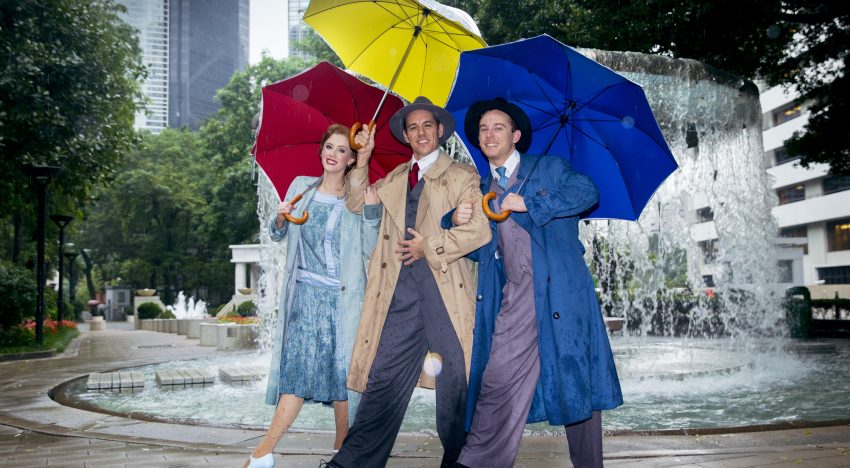 The irony was lost on nobody, when I caught up with the cast of Singin’ in the Rain in the midst of Hong Kong’s first black rainstorm signal in 2015, the dreariest day of the year, at Hong Kong Park. The show must go on, eh?

Based on the 1952 film starring Gene Kelly and Debbie Reynolds, Singin’ in the Rain follows Hollywood A-lister Don Lockwood’s transition from a silent film to an all-singing, all-dancing “talkie” star in the late 1920s, as well as his budding romance with aspiring actress Kathy Selden. Ranked 5th on the American Film Institute’s list of 100 greatest American motion pictures of all time, it’s a lighthearted and lovable musical comedy, with a spectacular multi-Olivier Award nominated stage adaptation that cannot be missed.

In the sanctuary of the little park cafe we were huddled in, stars Grant Almirall (Don Lockwood), Bethany Dickson (Kathy Seldon) and Steven van Wyk (Cosmo Brown) laughed, hummed, and quite literally, sang in the rain, while chatting about the upcoming Hong Kong leg of their international Singin’ in the Rain Tour. Having just wrapped things up in New Zealand, the show is set to open on September 25th at the Lyric Theatre, Hong Kong Academy for Performing Arts. Here’s what I found out from the cast: 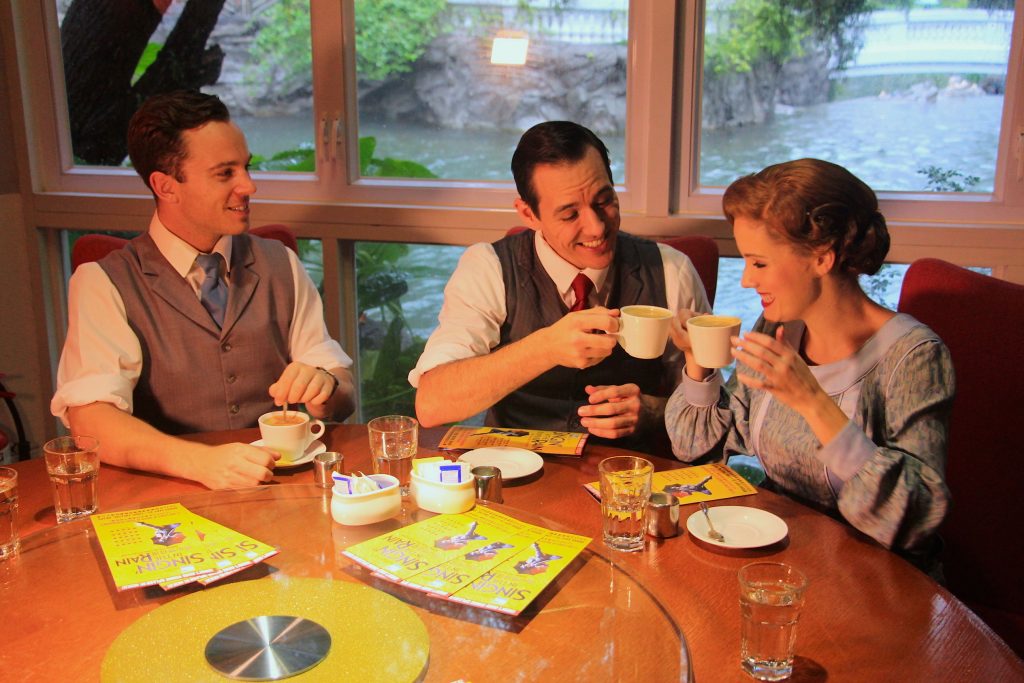 1. Steven van Wyk was sort of cast by accident

Quite simply put, van Wyk is a multi-award winning dancer and choreographer. Having most recently acted as resident director and choreography of Fugard Theatre’s The Rocky Horror Show, as well as taken on the roles of dance captain in the Cape Town season of the Sound of Music and Sunset Boulevard, van Wyk is dance royalty, in his own right. With a strong background in physical theatre as well, it would seem that in many ways, his role as Don Lockwood’s witty wingman (and occasional awkward third wheel) is perfect for him. After all, slapstick humour and physical comedy is a huge part of Cosmo’s appeal, made most evident with his solo sequence, Make ‘Em Laugh.

Being cast as Cosmo though, was not something van Wyk had expected. “I didn’t actually pursue the role. I was asked to help out for auditions. The associate choreographer came out of London, and they needed someone to help out with auditions in Cape Town, so I went along. They spent time with me, got to know my personality, and at some point, the creators from London just turned to me and said ‘Why don’t you read for Cosmo?’ They were just throwing all the Cosmo material at me, and I did it, so I was incredibly lucky to get [the role] that way.”

Having toured internationally as Maria from the Sound of Music, Sandy from Grease (the latter having even brought her to Hong Kong) and now Kathy Selden from Singin’ in the Rain, Dickson is no stranger to being a leading lady. She dedicates her performances to her “Dee” and “Pa”, and explained that her knack for musicals ran in the family. “My mom’s parents were very theatrical. They had done a lot of musicals in the past. I know that they would be very proud of what I’m doing, because they’re so passionate about musical theatre. So are my parents. It’s even more special, because it’s three generations…the love of theatre that runs in the family.”

3. Gene Kelly clones invade the stage at the end of each night

Perhaps what has allowed Singin’ in the Rain to remain so dear to our hearts despite the test of time, is the ceaseless charm that Gene Kelly brings to the film. As a tribute to the cinematic legend, creators managed to work something into the finale, one of Dickson’s favourite moments from show. “When we had the creative team from London direct us, they said something that was really beautiful. Although the story’s finished, the show’s finished, everyone comes on stage. It’s basically a tribute to Gene Kelly. Everyone is their own Gene Kelly. Everyone is dressed the same. We are all just channeling Gene Kelly. It’s a really beautiful moment. It goes without saying that when you see Singin’ in the Rain, you think Gene Kelly.” 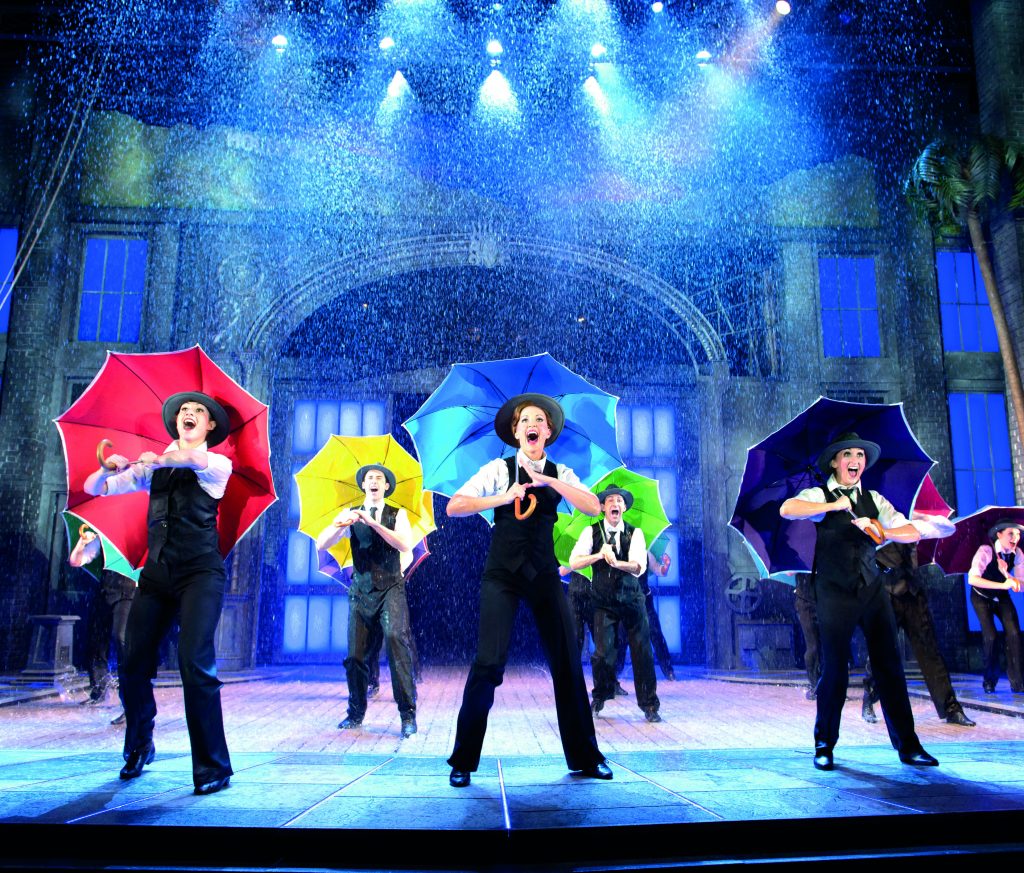 4. Being in Singin’ in the Rain has been genuinely fun

Dickson went on to explain just how much fun doing the finale is. “It’s just the most incredible moment. We have so much fun. Every time we come on stage, we’re laughing, just enjoying the moment. We really are laughing, and having fun. We’re not pretending. It’s incredible. ” 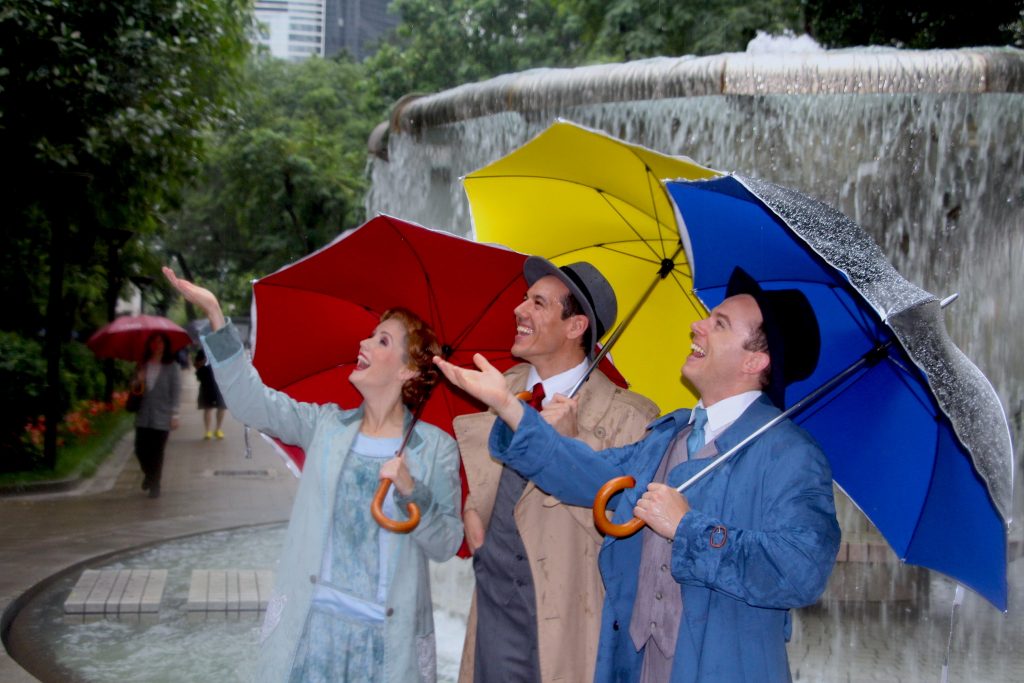 I would not wish it on anyone, to have to experience the full wrath of sticky, wet Hong Kong summers in three piece suits with trench coats, or floor length dresses with equally overcoats. In true Singin’ in the Rain spirit though, Almirall, Dickson and van Wyk jovially braved through the weather with infectious smiles. If the gleeful and enthusiastic manner with which the interacted with each other and press was in any way, a representation of their on stage chemistry, then the show is sure to shape out to be spectacle and hub of pure joy.

With 12,000 litres of water used (and recycled) every show for Almirall’s solo Singin’ in the Rain sequence and the finale, audience members can expect to leave the theatre a little wetter than when they first entered. I was assured that it literally rains on stage, so much so that front row audience members are provided with plastic ponchos and the cast all have to wear custom made shoes with rubber underneath them. The water does work magic though, with Almirall, Dickson and van Wyk unanimously naming the iconic Singin’ in the Rain sequence as one of their favourite moments from the show.

You can check out our feature-length interview with Grant Almirall here, when we also challenged him to a Singin’ in the Rain-themed “Would You Rather…?”, and made him do an impression of Lina Lamont’s ear piecing “I CAN’T STAND HIM”. It’s a running gag in the show, you’ll have to see it to understand it.

You can catch Grant Almirall, Bethany Dickson and Steven van Wyk live on stage from September 25th – October 11th. Tickets are available at HK Ticketing, from $445 – $995.