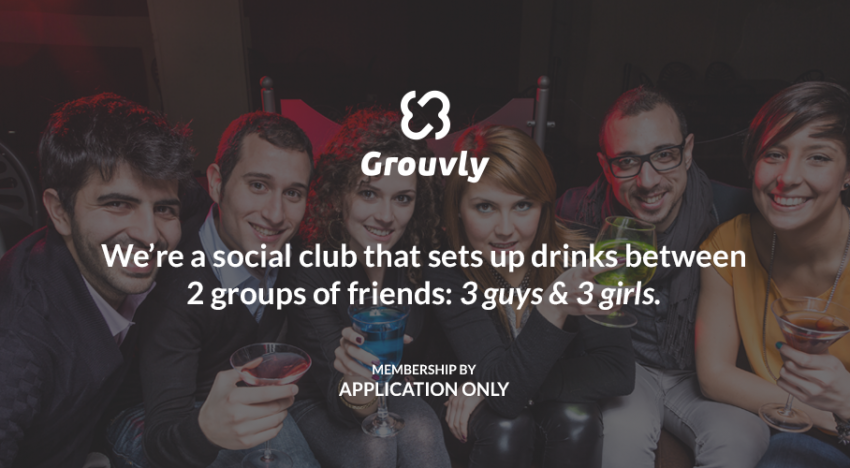 A couple of weeks ago, we told ya’ll about Grouvly, a groovy new site that sets two groups of threes up on blind dates around Hong Kong. Community writer James Anderson decided to chime in, and gave us a chronological account of seven bizarre things that happened on his Grouvly adventure.

1. Show up with one of my friends already hammered

The thing about eight o’clock on a Friday night is that it is perfectly acceptable to have already been drinking for three hours at that point, which is not something I accounted for before going on my Grouvly. One of my would-be co-pilots had taken it upon himself to go for happy hour immediately after work prior to our Grouvly, meaning that he was already three pints deep and stumbling up to the bar by the time we arrived. Oh no?

2. Immediately get in a heated argument about Candy Crush Saga

One drink into our Grouvly and things are still pretty normal. Basic “so what do you do?” type boring questions are thrown around. I’m not exactly sure how it gets brought up, but one of the girls we are with says she is stuck on level 190 of Candy Crush. Normally I would deny all knowledge of the app, but alcohol does silly things and I felt the need to brag, being stuck on level 194 myself. She proceeds to pull out her phone, asking me to beat the level for her. This turns into a heated debate as to which pieces to swap where, while SHE tries to coach ME, the more experienced Crusher obviously, on the best strategy. All of this goes down while our friends look at us in shame, but unwilling to jump in the middle of a Godzilla vs. Mothra battle of epic proportions.

3. Drink from a giant hollowed out watermelon

No one is ever fully prepared to drink from a giant hollowed out watermelon full of what I can only assume was rubbing alcohol, Everclear, and snake venom. But one member of our party enthusiastically ordered it for the table, claiming that it sounded delicious. It arrived with like, eighteen straws so we all got to work on it. I somehow ended up doing the heavy lifting though. By which I mean I literally lifted the watermelon above my head. Why? I don’t know. I was pretty smashed having just drunk an entire Gallagher punchline worth of liquor.

I don’t know why I felt that more alcohol was necessary after the whole watermelon thing. I only remember thinking, “These have alcohol in them right? Cool. Now they’re in my stomach.”

5. Seeing my friend use way too much tongue while making out on the dance floor

You know that thing where you are at a really good level of drunk and just vibing out to a song at a club, minding your own business, when you look up and see your buddy straight up licking another human being’s tongue? And her’s is licking his as well like some type of grotesque M.C. Escher drawing? And you want to look away, but it doesn’t matter because the image has already etched into your retinas? Yeah. That happened.

6. Trying to maintain and act like I’m cool when I’m clearly not I’m like “Oh hell yeah. Let’s get burgers. I love food.” Meanwhile I’m falling over, slowly succumbing to gravity and alcohol in the street. Then we are eating burgers and I am trying to be real casual about the fact I am at that special level of drunk where you can feel the full acceleration of the Earth’s orbit and it totally floors you. The girls are asking “You ok?” and I give the most unconvincing “I’m totally ok. Did I mention I love food?” ever.

7. Having to listen to my friend butcher the words to Wonderwall at a karaoke bar

His entire first verse of the song was one big slur, the only word of which I could decipher was “tantalize” which actually appears NO WHERE in the song. So riddle me how that one snuck in there? Meanwhile, I’m just in the corner shaking my damn head.