Contrary to what their music may exude, synthpop brother-sister duo BROODS are the antithesis of broodiness when I catch up with them in the sanctuary of a cosy little white tent, backstage, at the Clockenflap music and arts festival. Having just put on a stellar performance to eager Clockenflappers, the premise for their delight is evident. “That was probably one of the craziest crowds ever,” describes Georgia. “We were like, ‘I hope at least a hundred people come,’ and thousands of people were there! It was insane! And [Hong Kong] is such a beautiful, beautiful city.” Caleb is quick to chime in. “I’d say [Hong Kong] is the best city that we’ve ever played to… sun going down, looking over the water and all the buildings, it was crazy.”

Since the release of their debut album, Evergreen, which dropped at number 1 on the New Zealand album chart in August 2014, BROODS have been caught in a whirlpool of stardom, going on to play major festivals worldwide and to become tour buddies with the likes of Sam Smith, most recently also winning Album of the Year, Best Group, Best Pop Album as well as Radio Airplay Record of the Year (for Mother & Father) at the 2015 New Zealand Music Awards. The award winning Evergreen is an amalgamate of sombre melodies and candid sentiment. While some critics have labelled the album as overly monochromic, BROODS proved to be versatile live performers during their Clockenflap set. Songs like Everytime were delivered with infectious exuberance, with Georgia venturing spontaneously in and out of dance mode. Portions of songs such as Four Walls were also audaciously, yet flawlessly, tackled at an octave higher than originally recorded, with Georgia attempting the occasional soul piercing wail, Lana Del Rey style, that, when layered upon the lush and dreamy soundscape ever so carefully crafted by Caleb, were able to capture and toy with the heartstrings of the Clockenflap audience. 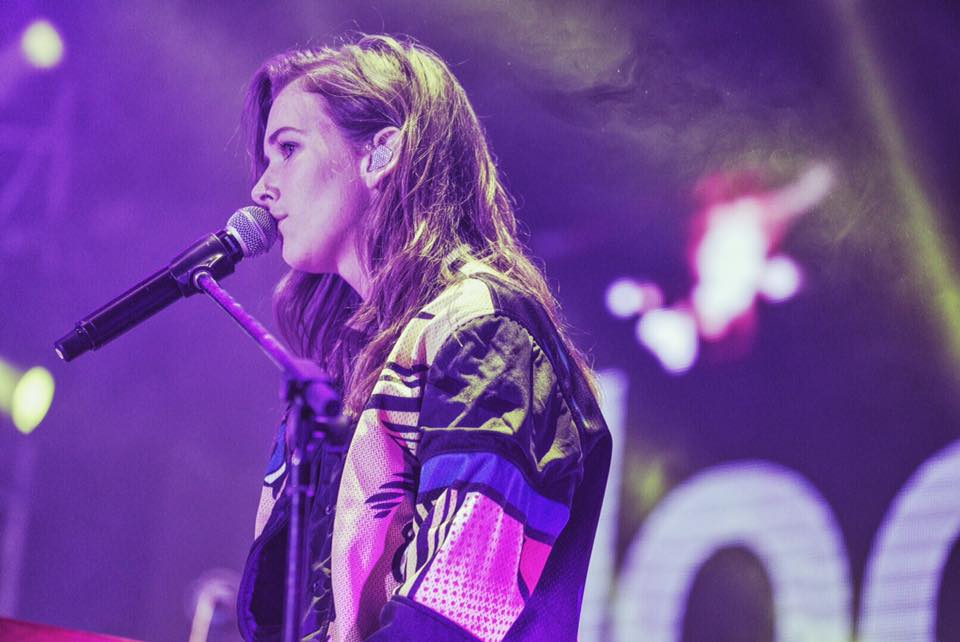 Soundtracked by the groovy sounds of the legendary Earth, Wind & Fire Experience ft. Al McKay performing in the not so distant background, I talk to BROODS about karaoke nights, the idea of cats serving coffee, frantic Christmas shopping, and happier tunes for album number two.

What do you reckon a “Clockenflap” actually is?

CN: I have no idea. Can you tell us?
ML: I think it’s meant to be some sort of bird? I don’t actually know.
GN: First thing that comes to mind is a bird. Quite an… interesting name.
CN: I definitely heard it wrong the first time haha 😉 .
ML: Oh. OH. LOL. Ok. Let’s not go there guys. Gotta keep this PG-13.

If you could bring back people from the dead, what would be your dream festival line-up?

CN: *Gives me scrunched up, ‘too many to choose from’ face* The Bee Gees. ABBA.
GN: The ones that you sing karaoke to! Queen, Michael Jackson, Amy Winehouse…
ML: *Gestures behind me* I suppose Earth, Wind & Fire are from that era of music as well.
CN: I know! Some of them were on the same bus as us coming here, I saw one of their cases labeled “Earth Wind & Fire” and I was like “OH. MY. GAWD.” *Actually does full on, Janice from FRIENDS impression*. We sang one of their songs recently at karaoke like, 2 days ago.
ML: What are your go-to karaoke songs?
GN: My favourite one that we did the other night was probably Can You Feel the Love Tonight, from the Lion King soundtrack.
CN: I think my first pick was Rock DJ from Robbie Williams? It’s just a good register for me.

What do you miss most about New Zealand when you’re touring overseas?

CN: Probably the coffee.
ML: But we have coffee too eh?
CN: Yea. We take coffee way too seriously though.
GN: There’s a massive, massive coffee culture, in New Zealand. Everybody takes so much pride in their coffee.
CN: Like, you will not last, if you don’t have amazing coffee. People just won’t come to your place. We’re very picky.

I saw on Twitter that you guys were at a cat cafe in Japan recently? Explain.

GN: HAHA yes. So you go into this room, and it’s filled with cats, and you can go and have coffee, feed them little treats and stuff. It’s just therapy eh? All these soft little kitties. So much fun. I think there are dog cafes as well in Tokyo, and that would have been my dream. I heard about them a while ago and I knew that when I went to Japan, I had to go to a cat cafe.
ML: So to clarify, it’s not cats serving coffee.
GN: Noooooo.
ML: Oh boo.
CN: That would be awesome though!
GN: Cats would be way too temperamental to do that.
CN: Maybe you could get dogs to do it?
GN: Yea. Dogs are a little bit more obedient. Cats just do whatever they want.
GN: They’re just sassy.

Your songs are all very “broody” and intimate. Does it ever get exhausting having to pour your heart out every night, and relive painful memories when you perform?

CN: I think on certain nights it does.
GN: Some nights, songs mean more than other nights, if that makes sense. They’re all very personal experiences of ours, of some things that have happened, that have triggered memories. And on the day that we play it, we’ll feel a bit more “urrrghhh OMG”. But that’s kind of what we look for.
CN: The fact that you can still feel the same way as you did when you wrote it, and other people can feel it as well, is pretty amazing.
GN: I think expression is a massive privilege that we have, and the fact that we get to express ourselves to a crowd every night, it’s quite therapeutic.
CN: It’s like seeing a therapist every night..
GN: Even though it is sad, and there are a lot of sad songs on the record, the fact that people can relate to them and people like to listen to them, and the fact that it’s a song now, it just makes you feel way better. Even if it’s an unresolved song, even if the issue you’re singing about is unresolved, the fact that you can sing to a crowd and have them understand what you’re talking about, it’s hard to beat the kind of feeling.
CN: The new songs are a lot happier!

Even if it’s an unresolved song, even if the issue you’re singing about is unresolved, the fact that you can sing to a crowd and have them understand what you’re talking about, it’s hard to beat the kind of feeling.

So album number two is on the way?

CN: It’s actually completely backwards. We had 5 weeks to write the first album!
GN: There were a few songs on the first record that, even when we recorded them, were nostalgic. They weren’t from things that were happening at that moment of time. We’re lucky enough to be always experiencing new things, and always going through incredible adventures. Everybody kind of has to overcome obstacles. It’s just about taking them, and exaggerating them, and making them into a way out of proportion song LOL! I think this new one, has a little more variety actually, with themes and vibes.

Everybody kind of has to overcome obstacles. It’s just about taking them, and exaggerating them, and making them into a way out of proportion song LOL!

Are we going to hear Caleb sing on it?

GN: Yes!
CN: Um… a little bit? She’s way better than me though. Let’s just leave it to her.

Joel Little (Grammy Award winning songwriter / producer who worked with fellow islander Lorde’s debut EP and album) had a pretty big role in producing your first album. How big of a role does he play in the second album?

CN: Still a big role. We just feel really comfortable with him.
GN: When you find something good, you just hold on to it.
CN: We’ve tried writing with a whole lot of other people as well on this album, but the songs that will make the album are the ones that we write with Joel, because they’re the best songs that we write. We just have a very special relationship that works.
GN: The way that we write with him has evolved as well. It doesn’t sound the same, even though we’re writing with the same guy. He’s been learning more as a producer, and we’ve been learning as well as songwriters, so it’s nice to be able to go back and have that ability to create variety in an album. If you have something that works…
ML: Stick to it!
GN: Exactly! 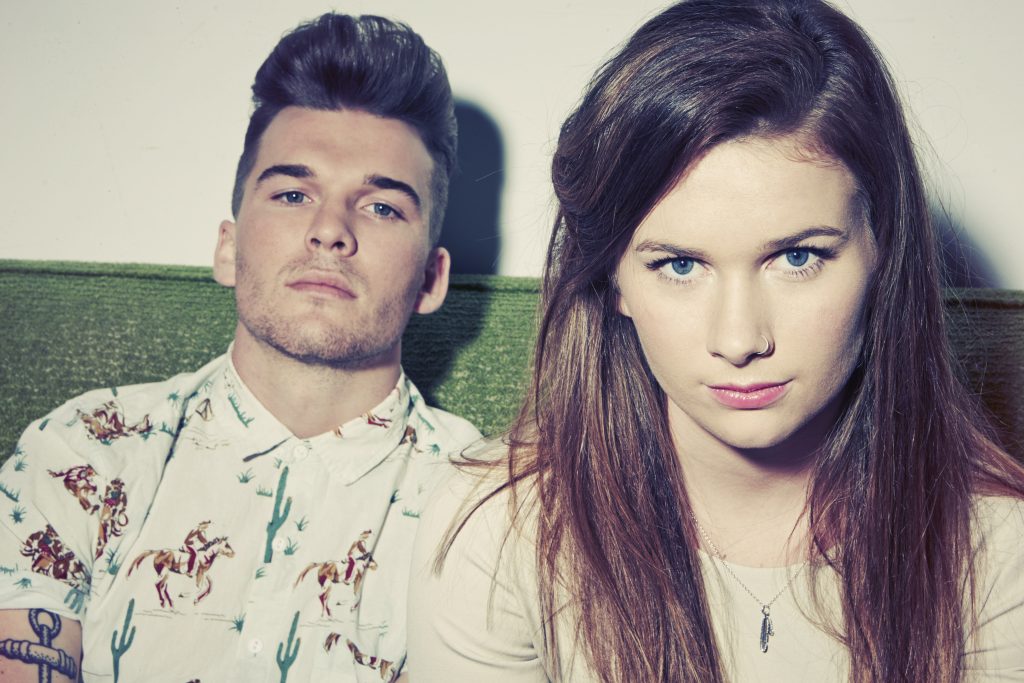 It wouldn’t be a MadbuzzHK interview if we didn’t end things with very random questions with zero depth. So here goes. Which one of you is more likely to…

Show up late for rehearsals?

CN: *Points incessantly at Georgia*
GN: I have this thing where I’m either 20 minutes late, or an hour early. I can’t. I have no concept of time.

GN: Probably Caleb.
CN: I’ll nail it though. I’ll kill it. I’ll do a good shopping last minute.
ML: What’s the best thing Caleb’s ever bought you as a present?
GN: This year, I turned 21. I don’t know if that’s a big deal over here, but in New Zealand, you have a big party, and everybody embarrasses you with stupid stories about your childhood. My parents, Caleb and my partner got me a custom made acoustic guitar, with “Broods” written on it, and it’s like, the most beautiful guitar ever.
CN: I was very specific with how it had to be.
GN: And it’s like, the best thing ever.
CN: Now I just want to steal it off from her, because that’s like, the best guitar I’ve ever played on. I’m so jealous.
ML: Well… take a hint, Georgia. This Christmas. You know what he wants.
GN: Well he got himself a guitar as well, it’s just not as cool as mine.

Win the Hunger Games (since a new HG movie has just come out)?

GN: Definitely Caleb.
CN: Yea. Georgia would just try and be friends with everyone and it wouldn’t work. She’d just get killed.
ML: But maybe that’s the tactical way to winning. Befriend everyone, then turn on them.
GN: It’s hard to tell, maybe in that situation I’d just become a crazy animal.
CN: Or she’d just hide the whole time and die of starvation, because she’s just way too scared.
GN: I’m scared enough watching the Hunger Games, being in it would be a nightmare. I actually had a dream about being in it.
ML: And… did you end up OK?
GN: Well you can’t die in your dreams haha. You’d just wake up.

Wake up on a Monday morning, hungover from a festival weekend?

GN: Definitely Caleb. Definitely him. He’s a lot more of a partier. I’m not exactly… I don’t really do that.
CN: She’s like a 60 year old woman stuck in a 21 year old’s body.
GN: I like hanging out at home. I’m more of  a cup of tea with an episode of Vikings type of girl.