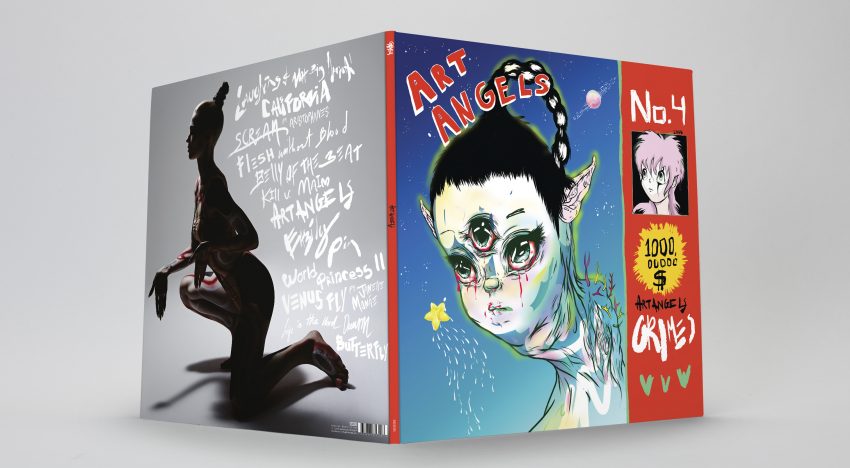 Claire Elise Boucher AKA Grimes AKA the queen of bedroom pop has had quite an eventful journey since her last album Visions in 2012. Having developed her musical style in her previous projects, Visions solidified that dreamy indistinct Grimes sound and launched her into a weird place. Somewhere between being an ‘underground’ musician and an instant pop icon for teenage girls around the world that loved the internet and dyed hair as much as she did.

Her artistic dilemma since Visions has been pretty publicized with her not being satisfied with REALiTi and calling it ‘lazy’ and Go for being too ‘pop’. Being known for producing her other projects with GarageBand, Grimes took on a new instrumental direction by learning the drums, violin and guitar. It raises fundamental ideas of what it means to be a musician nowadays, do you create music for yourself or your fans?

A complex question but Art Angels could be Grimes’ response to what it means to be an artist. Listening to the album, there are a few songs that reflect how Grimes continues to push the barriers of music and herself as a musician.

California: Not actually a song about hating California but about the infamous musical journalism site Pitchfork, it’s a track that deals with how the music industry treats the artist as a product (‘You only like me when you think I’m looking sad’),  juxtaposed with cheery instrumental riffs.

Venus Fly: An unlikely collaboration between the talented Janelle Monáe and Grimes, Venus Fly also features some mad violin skills from Grimes. Art Angels is an album that sounds like it would translate very well on a live setting with Venus Fly being driven by set of catchy repetitive lines and bouncy rhythms.

Life in the Vivid Dream: A calm down as the track after Venus Fly, Life in the Vivid Dream is in comparison more mellow to the other songs in the album and deals with the struggle of environmental activism. Many of the tracks on her album discuss a type of pain; one where she tries to change something but she’s unable because we aren’t noticing it and doing it collectively.

Grimes’ has had a slightly confusing career as a kind-of pop star but not needing major help from others and still recording in her home studio. These contrasting aspects has made her one of the most interesting personalities in the industry because of her realness. We are no strangers from hearing musicians being pressured by their labels and producers to move a certain direction or release songs they don’t want to perform, she’s vocal about these incidents. She continues to represent for musicians that want to have a say in their artistic creations and that is something we should all support.