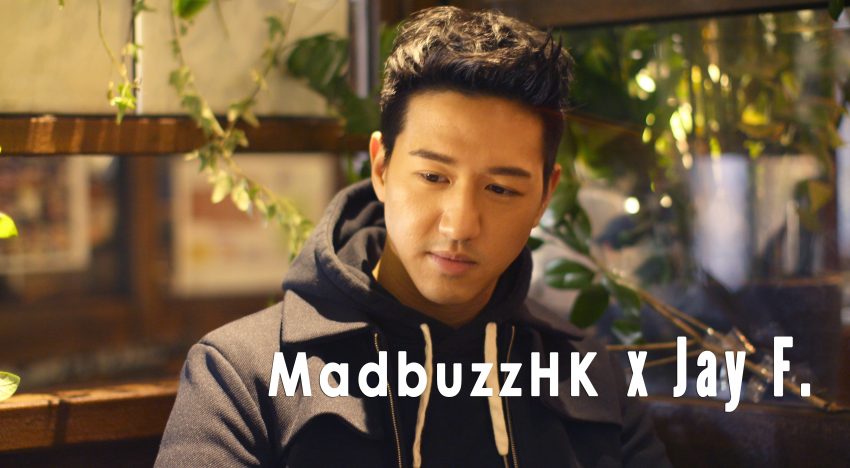 Jay Fung (馮允謙) loves the Backstreet Boys, Netflix (± chill? 😉 ) – ing to Friends, and snazzy sneakers. And while that could easily be the Tinder bio of any guy next door who grew up in the 90s, Jay Fung is also almost a household name in Hong Kong, after the Canadian raised singer-songwriter’s 2011 stint on Season 3 of TVB’s singing talent competition The Voice (超級巨聲3) culminated in a record deal with the mammoth local record label, EEG. In conversation and through his music, Jay presents himself as an approachable, charismatic and authentic artist, who’s work carries trademark laid-back vibes, garnished with a dash of Western influence that hints at his upbringing. Ahead of the release of Jay’s new EP Coexistence, Jay chatted to Madbuzz about finding musical inspiration from the toilet, the Friends character he thinks he’s most like, and tried his hand at explaining some Canto slang… emphasis on “tried”.

MICHELLE LI: Hi Jay! Tell us about Keep On, Fight On, the lead single from your new EP.

JAY FUNG: Well this song was written at a writing camp with EEG, my music company, and also with Warner. We did a crossover, where we just had a bunch of singer and songwriters sort of jam and see what we could come up with. I teamed up with another composer – arranger, T-Ma, Terrence Ma, and then also with Cousin Fung. So we sat in a room and wrote Keep on Fight On in about 15 minutes.

ML: Cantonese is a notoriously melodic language, and in a way it makes Cantopop almost it’s own genre of music. A song that might sound good in English might not work as well in Cantonese. As a Cantopop singer-songwriter who’s first language is English, have you found that the songwriting process is a bit more challenging because of it?

JF: Yes. I realized from my first two albums that you can’t just take an English song or a Western production, and put Cantonese lyrics to it. Because if you do that, it’s not there completely. I guess melodically, it’s difficult for people to comprehend. So from my 3rd album, I started writing stuff that was a little bit more melodic. At the same time, I wanted to incorporate a Western structure in my songwriting. Like Keep On Fight On, the songs from my last album have a more Western production. In most of my songs, I try to find a balance. I think you’ve got to do that for the market. I was looking at Korean music for instance. In a lot of Korean music, they do a lot of melodic stuff but at the same time, the production is very Western, and they add some English words and phrases in it. I think that seems to be more popular nowadays. And I think that’s what I’m trying to do with my music as well, just trying to incorporate some Western elements into it.

ML: Does your songwriting always happen at a studio? Where’s the weirdest place you’ve written a song?

JF: It doesn’t always happen at a studio! It could happen in a variety of places. It could be at a restaurant, I could be sitting outside on a sunny day maybe in a field somewhere. I guess the weirdest place is probably the washroom or the shower. I’ll be sitting on the can sometimes, thinking of melodies and something comes up. There’s a song from my 3rd album, called 紙筆墨, which is more of a traditional Chinese / RnB kind of song. It’s kind of unique in the sense that it’s got an eclectic feel to it. That song was written in the shower, in about 15 minutes. You’re in your most natural and relaxed environment. I guess that sort of helps creative juices to flow. 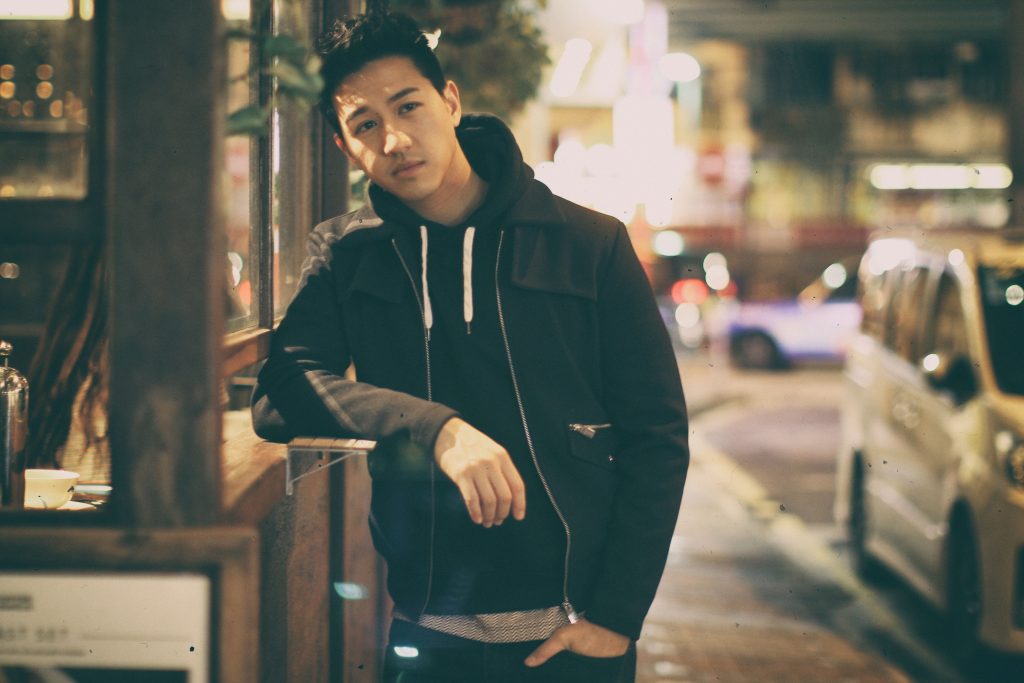 ML: So I was on your Instagram doing research. I would say a good 40% of your photos are just, sneakers.

ML: How many pairs do you reckon you have?

JF: Probably over 100 in total for sure. Maybe 150. I’m a big, big sneaker fan. I’ve always liked basketball sneakers. And it’s nice because I’m now sponsored by Nike and some brands. They send me a lot of stuff, so I don’t mind wearing it or posting it.

ML: I feel like jogging is also a big part of your life.

JF: Yes, yes. It’s healthy. I’m very health conscious in that sense. It helps with my breathing, it helps me keep fit, and at the same time, it helps me just blow off steam. It just helps relax your body from stuff you have in your mind.

ML: What type of stuff do you listen to when you go on your late night jogs? 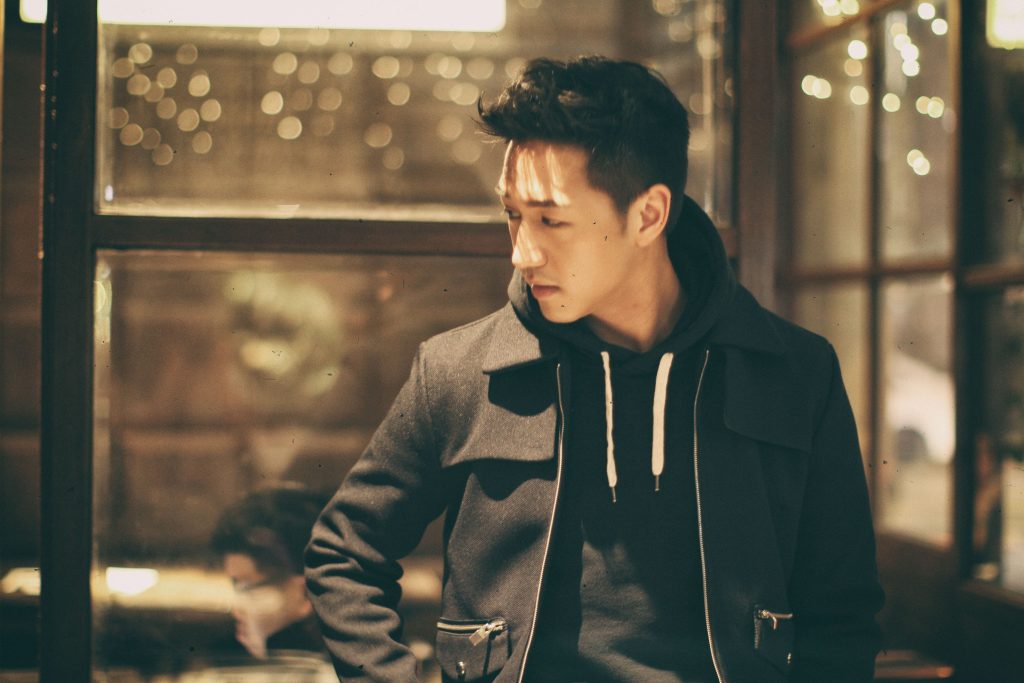 ML: Do you have any guilty pleasures, music wise, on your phone?

ML: I think you may very well be the only male I know who is willing to publicly declare your love for the Backstreet Boys.

JF: I love the Backstreet Boys. I used to be a B-rock (that’s Brian Littrell for those who don’t speak BSB fan language) fan. I like B-rock better than Nick Carter. With songwriting, listening to that kind of stuff when I was younger really helped with understanding the pop structure of a song.

ML: Backstreet Boys songs are kind of go-to karaoke songs for my friends and I. How do singers behave when you go karaoke-ing? Do you ever feel the need to up your game because everyone is so professional?

JF: Do we up our game? I think sometimes we do. I wouldn’t say it’s a duel, but there’ll be times when we’re singing, and we don’t want to give our mics up. We just want to keep it. And the other person wants to keep singing, so you just have to battle it out. I mean it does happen, but usually when I go karaoke, I just want to blow off some steam, you know? Have fun, relax. I guess sometimes when you drink while you’re karaoke-ing, it’s not really karaoke anymore. You’re just chilling, talking with friends and hanging out. 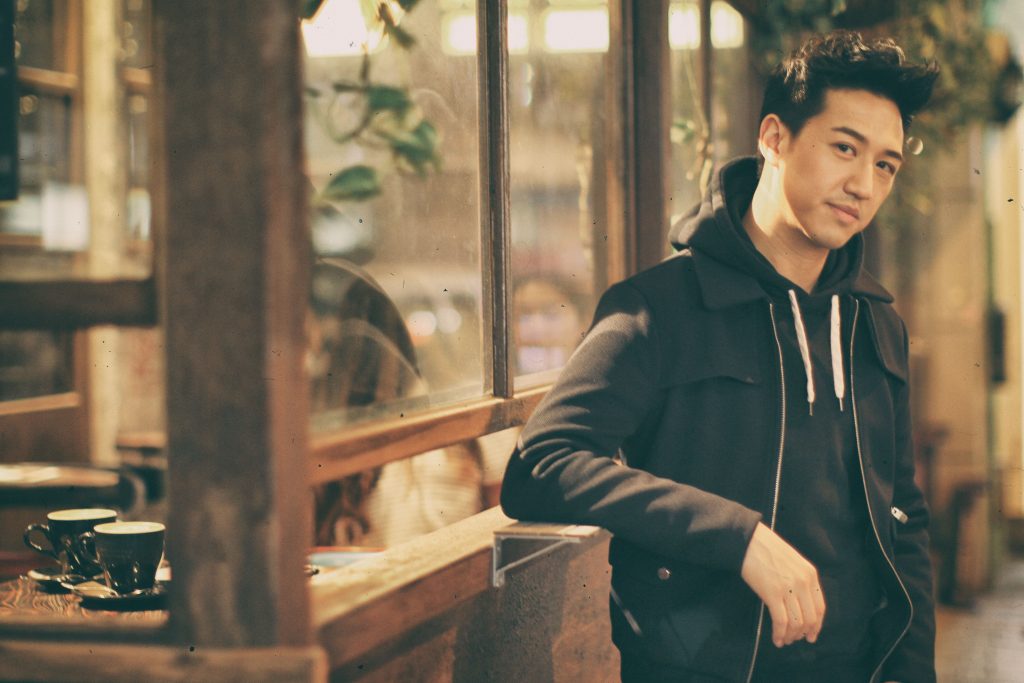 ML: Lately you’ve been dipping your toes into acting as well, appearing on the TVB drama, Angel in the Making (實習天使), and etc. What was that like for you? Is acting something you’ll be pursuing more of in the future?

JF: So what happened was, the director of the show was looking for someone who was a little bit more Westernized, so he called my manager up. I think it’s hard to say no to something like that. If someone offers you a part, obviously you’ll try. This industry is all about opportunities. If you don’t try, you don’t know if you’re good at it or not. So I just sort of did it because I wanted to learn more about acting. I wanted to learn more about what I was good at, to see if acting would possibly be a route I would take in the future. So I think it was good that I tried it out. I think after this time, I would like to try and act a little bit more, but I think I would have to learn a little bit more about acting, take classes. That takes time and experience. I’m not going to shut it away or shy away from it. It’s something I know I’m not really great at yet, but it’s something I definitely want to do and get better at.

ML: What TV shows are you personally watching at the moment?

JF: I watch a lot, lot of different shows. I like a lot of comedy. Comedy takes your mind off stress and work stuff. I like Big Bang Theory. I used to love How I Met Your Mother.

JF: Yes, I still watch Friends! I still pull up episodes and watch them because they just make me laugh. It’s nice. It kind of reminds you of childhood. My brother and I live together. Sometimes movies are a little bit too long so we’ll be like “Let’s watch episodes of something we like. Let’s watch Friends!” Friends is reliable. Because it’s been on for 10 seasons, you know what happens, but you don’t mind watching again.

ML: Which character do you think you’re most like in Friends?

JF: I would like to be like… Ross? But I don’t think I’m as annoying as Ross.” 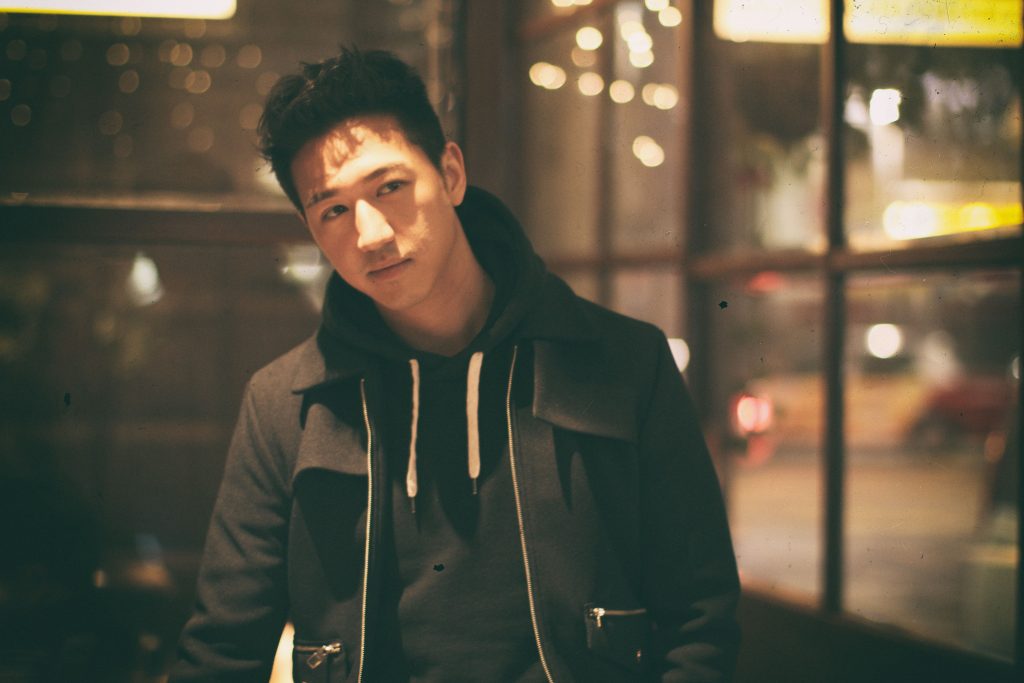 ML: So what’s next for you?

JF: I’m hoping to make more music. Recently I’ve been doing a lot of collaborations. I’ve done something with Robynn and Kendy. They’re from Universal. I’ve done something with Tim from Dear Jane as well. I think I’m looking forward to this more, basically doing a bit more songwriting. I want to keep making music and hopefully, if I can, try film. That’s one thing I haven’t tried. I’d like to get my toes in the water and just sort of see how that goes.

And, as per Madbuzz usual, we got Jay to handle a round of quick fire questions and Never Have I Ever.

1. Never have I ever stalked my fans on Instagram.

And lastly, for LOLs and for self-enrichment (in descending order of significance of course), we got Jay to attempt to define some Canto slang. On a scale of Backstreet Boys song awesomeness, his performance was probably an If You Want To Be A Good Girl (Get Yourself a Bad Boy), ie fairly mediocre.

JF: Oh I know that one. I’ve used this before. Sau pei means you suck, you know? Just forget about it. Just stop. When someone really sucks at something, you gotta be like “no dude, you have to sau pei.” Am I right?

JF: I think it has something to do with dating. I’ve heard of it, but I’ve never used it before.

ML: It’s kind of like, when you date someone, you exit the pool of loners, or you exit the friend zone. Or people will ask you to treat them to 出Pool飯 / chut pool farn (post-chut pool meal).

JF: Oh, so like, when you date someone, you’ve got to celebrate.

JF: I dont know this one. I know 吃螺絲 / sic lo see (To eat screws). Thats basically when you’re talking, and you stop making sense. You want to say something, but you completely lose your focus.

ML: Sic fa sung is kind of like when you’re just being chill, or other people are chatting away and you’re sitting there soaking up the gossip.

ML: I suppose so. Ok so you got like, one out of three.

JF: Well it was great talking to you. Hopefully I’ll run into you one of these days and we can go eat peanuts.

Jay Fung’s new EP Coexistence was released on April 22, 2016, and is currently available on iTunes for downloading, and Spotify for streaming. 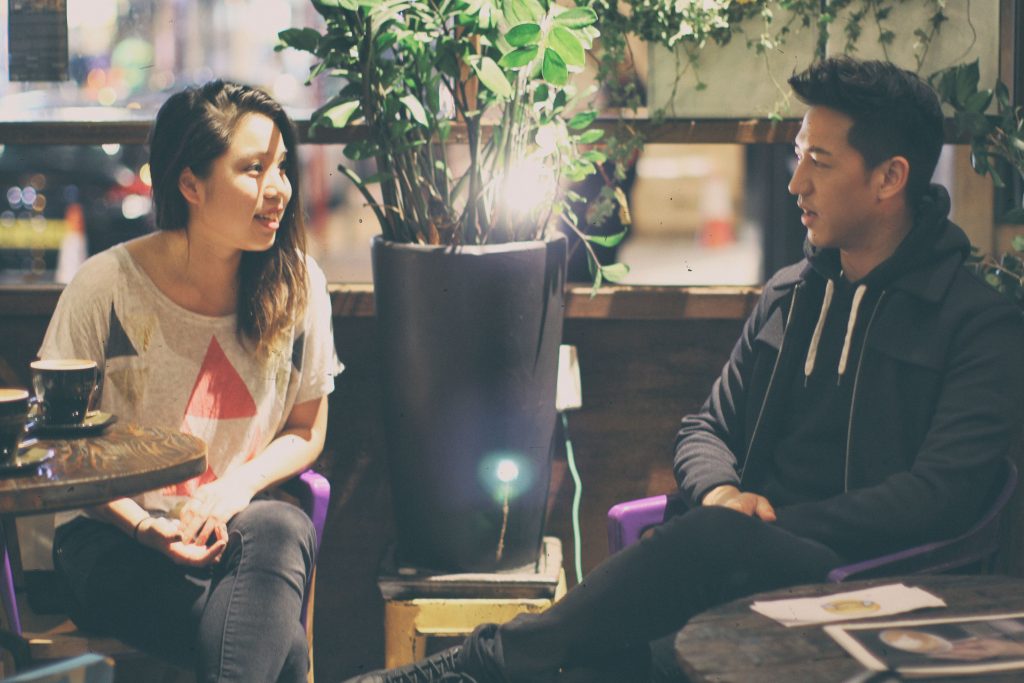