It’s that time of the year again. You’re scrambling to see all the nominees to avoid feeling awkward or left out when someone rants about Ava DuVernay not getting a nod for best director and the Academy’s diversity problem. Or if haven’t seen Selma yet, what about Birdman’s chances against Boyhood? And who do you think is behind American Sniper’s campaign that got it inserted into the mix in the first place? Is it political propaganda or not? In the end, awards can be very tedious and the race is hardly a fair celebration of the countless artists behind the art — but hey, it’s fun and we still manage to get pulled in year after year so let’s do this. 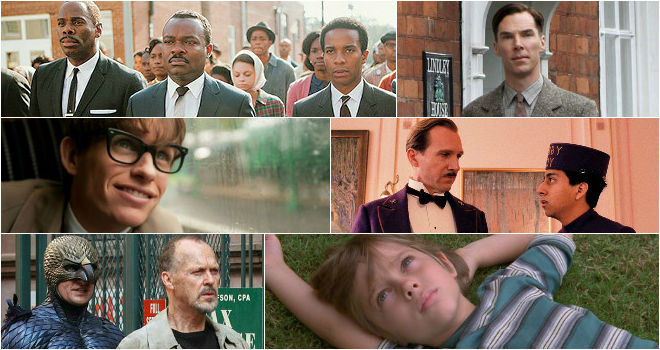 If you ask any mild film enthusiast or fervent film critic right now, they’d likely make the same remark about the state of the best-picture race. Like most years, it really comes down to just two, and this year the key players seem to be Richard Linklater’s 12 years in the making, coming of age tale Boyhood, and Alejandro González Iñárritu’s awesome-and-looks-like-it-was-shot-in-one-take-but-really-wasn’t Birdman.

While the former film easily steals appeal for it’s unique narrative structure, the plot is comparatively friendly at it’s core – with it’s bittersweet but ultimately optimistic portrayal of family values. But this is not to say that Boyhood resembles the safe, crowd pleasing nominee that typically wins over the grittier, quirkier opponent (in the form of Iñárritu’s wildly executed film this year). Boyhood is intrinsically a Richard Linklater film, and he’s been messing around with chronological filmmaking since the brilliant Before trilogy. In the end he is a filmmaker that isn’t scared of showing the beautiful side of love and relationships while simultaneously exposing it’s cracks and ambiguous ends. So chances are that it will triumph, but judging from the recent love for Iñárritu’s film (it racked all up the guild prizes, the SAGs, PGAs, and DGAs) and the EIGHT other categories it’s been nominated in, Birdman undeniably has the momentum here. But regardless of which film wins on Feb 22nd, it’s worth celebrating the fact that the likely winner will exemplify original and aesthetically bold filmmaking.

But let’s not forget about the others. The Imitation Game and The Theory of Everything fill up this year’s safe-British-biopic slot, and while the former film has performed very well at the box office, James Marsh’s Steven Hawking portrait has been garnering lots of attention for Eddie Redmayne’s performance. In addition, it’s best picture and screenplay won at the BAFTAs this past month. Unfortunately for Selma, the racial controversy ignited by it’s omission in the directing and acting categories may have inspired more anger towards the Academy above all else – with all the #OscarsSoWhite memes overshadowing the film’s actual campaign itself. With The Grand Budapest Hotel and Whiplash, both indie darlings have received remarkable acclaim, but Wes Anderson’s quirky and affectionate film takes the edge by playing the long game. Despite having premiered a year ago at the Berlin Film Festival, the romp has steadily maintained industry love and is most likely going to sweep the design categories. And as for American Sniper, it’s last minute swoop into the game probably suggests some heavy, clever campaigning (and Clint Eastwood’s lasting prominence in Hollywood), on top of a highly successful commercial run. After all, the film’s reviews have been universally split since it’s release and discussion about the Chris Kyle picture has only been limited to it’s politics (or rather lack thereof).